During September and October 2018 I found myself being part of a group of wonderful people; the creative team of Heiner Goebbels‘ latest production Everything that happened and would happen. Working all together in Manchester for a month, I offered my observation and support for this 3-hour-long performance, and got to know the 12 performers, 5 musicians, technical and production team. Next to assisting the creative team, I took photos of the performance for the promotional needs of the production company (Artangel).

Everything that happened and would happen was co-commissioned by 14-18 NOW: WW1 Centenary Art Commissions, Artangel, Park Avenue Armory and Ruhrtriennale, premiered at Manchester International Festival at the city’s abandoned railway post station.

Goebbels designed the performance’s preparation through 3 workshops that took place in Essen, Vietnam and Paris. The chosen performers worked together for 5 weeks in the actual performance space in Manchester. Next to their physical presence and hard work on stage manipulating the scenography with the assistance of the technical crew, there were text fragments recited as well. The text derived from the book Europeana: A Brief History of the Twentieth Century by Patrik Ouředníkof, and it was recited in many languages (either live or prerecorded – my voice was recorded too reciting in Greek).

The way Goebbels directed the performance and guided this huge team of artists towards a certain collective result was more than inspiring to me. I got very touched by his generosity, both on an artistic and interpersonal level, and found myself being influenced by his openness, the way he reads the available material, the way he puts together the present ideas, his willingness to test and improvise with what is there even – or especially – when things get artistically stuck. 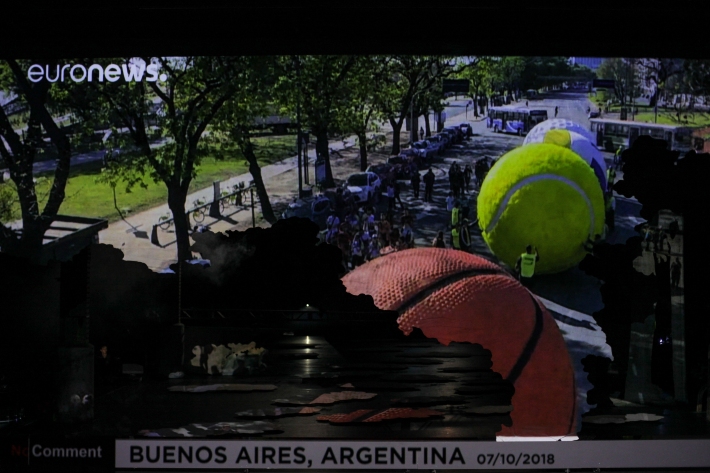 Working next to the production’s sound designer, Willi Bopp, was as well a pleasure. He has been working together with Goebbels for the last 30 years and we had lots to discuss and share (from technical details to various stories). The musicians involved were all great improvisers: saxophonist, percussionist, electric guitarist (with lots of sensors on the guitar), ondes martenot player and an instrument builder who programmed an automated organ. The piece had a certain structure and quite a few things had to be fixed (direction of music, certain sounds etc.), but there was as well lots that was left open for the musicians to explore and deal with during each performance.

The piece will tour to New York and Bochum in 2019. It was such a great experience. Hope to see them all soon!