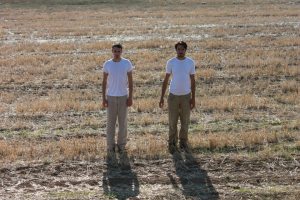 Food as an experience. The feast as a process and a spectacle.
Two men at a table and a pot boiling.
Their speech fragmental and orchestrated into duets.
From the simple conversation and agreement / disagreement to singing

In recent years, a “dialogue” has started between archaeology and theatre on concepts which both disciplines are interested in, like the body, the space, the memory, and the narration. The result of the above “dialogue” was the creation of a ‘hybrid’ discipline which uses theatrical methods to examine archaeological material and archaeological methods to approach the art of theatre. It is worth taking into consideration the work by M. Pearson and M. Shanks through the Brit Goth (see Pearson M. and Shanks M., Theatre / Archaeology, Routledge, London 2001). Two paradigms from Greece include the performance “Kalaureia”, created by members of our team, that took place in the temple of Poseidon, Poros within the borders of the excavation which was conducted by the Swedish Institute and a similar project that we began in September 2010 in the excavation of the University of Crete on the island of Gavdos.

All the above belong to a strange series of spectacles organized at archaeological sites in Greece, from the Delphic Festivals of 1927 to the lighting ceremonies of the Olympic flame and the feasts of the dictatorship at the Panathenaic Stadium in Athens. How do we experience history today? What is our relationship with the archaeological sites and how do they fit into the landscape, urban and non-urban? What are the limits of the language chosen by archaeologists to communicate information to the public?

On this basis we have been working in the Netherlands and in Greece on a performance that was presented in its complete version in September 2011 at the excavation held by the University of Southampton and the Archaeological Service at the tell site of Koutroulou, at Neo Monastiri, Fthiotida. Our main axis of work is food as an experience and how this is revealed by the archaeological finds and the links between music and spoken word, using the distinctive musical tradition of Neo Monastiri.

Rethymno version
The Meal was presented as well in the city of Rethymno (Crete, Greece) in January 2012, as part of the seminars of the course Public Archeology (University of Crete). The performance took place in a restaurant owned by a couple from Serbia. The rehearsals were integrated in the work that was done during the archiving of the excavation material from the Aera V of the island of Gavdos.

National Museum of Contemporary Art (EMST) | Afresh
The Meal has been be part of the EMST’s exhibition “Afresh, A New Generation of Greek Artists”. The work was presented in two parts: the installation that took place in the exhibition space of the museum and the performance that was given in the restaurants Salon de Bricolage and Katsourbos, as well as in the exhibition space. After the performances an open discussion with the audience took place.

Mediterranea 17 – Young Artists Biennale
The biennial contemporary art exhibition Mediterranea run in 2015 under the theme No Food’s Land. It took place in Milan, hosting artists from over 20 European and Mediterranean countries. The Meal was one of the official exhibition entries and was presented both as an installation and a performance.